Numbers 3 is dedicated to giving us a more comprehensive understanding of what this little tribe is all about. I found two main things and then had a big question about math.

Assistant (to the) Priests

The entire Levite tribe is given by God to the priests to assist them in running and keeping up the Tabernacle. They are divided into three groups, each with a campsite, a leader, and a responsibility.

Name: Gershonites
Population: 7,500 males at least one month old
Leader: Eliasaph son of Lael
Camp: Behind the tabernacle on the west side.
Responsibility: Coverings, hangings, screens, and cords.

This is a well organized group! But unfortunately for me, I had to revise my seating chart from yesterday. 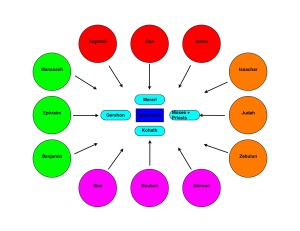 Way back in Exodus, (I really can’t remember the exact chapter. Anyone want to find it?) God decreed that all firstborn male children belonged to him. I was a bit confused by this and had basically forgotten about it until now. Apparently He still cares about that but has found a way to make it all work out.

The Levites act as substitutes.

They are now devoted to God instead of everyone else’s firstborn sons. God will accept the Levites as a form of payment. The catch is, there are too many firstborns in the other tribes. 273 too many, in fact.

So God will accept five shekels per firstborn in payment.

That means I am worth five shekels or one Levite. How exciting! What is also exciting is God being cool with using a substitution system.

If you add up the numbers I listed above, you get 22,300. The text says you get 22,000. Which is really a shame since that whole firstborn thing would be solved without any extra payment if those 300 Levites were counted.

What happened to the missing 300 Levites?

I’ll give a special shout-out on Monday to the person with the most creative answer.