You may recall that last week I wrote a little post about why taking a Nazirite vow would be awesome.

Well, just when you thought the awesomeness couldn’t get any awesomer, Numbers 8 comes along and drops more awesome things right into our laps! It is like Christmas all over again!

Are you ready? Let’s do this.

3 Awesome Reasons To Be A Levite

What? Crowd surfing? Like at rock concerts when someone gets lifted on top of the crowd and gets all felt up as they cruise along until the people get tired of carrying them and they fall to the floor only to get trampled by the very people who were feeling them up not 10 seconds eariler?

Yes. That. Sounds great right? Well, check this verse out:

Elevation offering? Usually that is just a piece of meat that someone waves in the air. How would you do it with people? I have an idea . . . 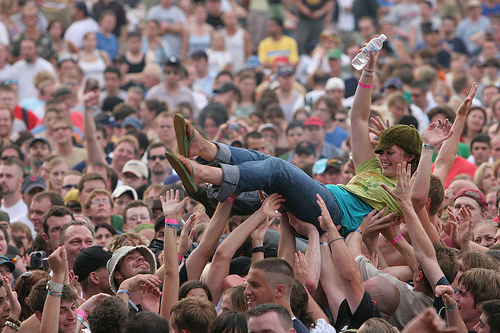 Who wants to get elevation offered next?

Nowadays, people work for most of their lives. You start somewhere in your teens and don’t stop until you are like 92. That’s the official retirement age, yes?

Well, if you were a Levite, you wouldn’t start work until you were 25 and you would retire when you were 50.

That’s a grand total of 25 years of work. Not bad.

What you do after that? Well, that’s up to you. What does a 50-year old do in the desert all day?

Ok, I am going to get slightly serious with this one.

“I (the LORD) have taken the Levites in place of all the firstborn among the Israelites. Moreover, I have given the Levites as a gift to Aaron and his sons. . .”

God separated a whole tribe for himself. But he wasn’t selfish with that tribe. The first thing he did was give that tribe to the priests as a gift. That seems pretty generous. That Tabernacle isn’t going to run itself!

Why would you want to be a Levite? Or if you don’t want that question . . .

What do you want for Christmas this year?