I’m reading Judges 5 and can’t help thinking, “Wait a minute, this sounds like rock and/or roll!”

Whoever says Rock music is of the devil obviously hasn’t read Deborah and Barak’s song. Not least because I haven’t seen a shred of evidence for the devil in the Bible yet. No, the snake doesn’t count. Not yet.

But more importantly, this song has all the elements of a truly epic rock anthem.

Now, this first one depends on your translation. The NRSV that I used kicked it off with this little gem: “When locks are long in Israel.”

No one has longer locks than rock stars. 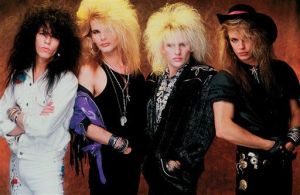 2) Sticking it to the Man

“Hear, O kings; give ear, O princes . . . . they repeat the triumphs of the LORD, the triumphs of his peasantry in Israel . . . . The people of the Lord marched down for him against the mighty.”

Listen up Suits! The people of the street are rising up!

Who doesn’t love sticking to the man?

And just in case that was a little too abstract for you, I’d invite you to read these rather lovely lyrics: “She put her hand to the tent peg . . . she shattered and pierced his temple.”

Jael, quite literally, stuck it to the man.

Only in rock songs, usually theatrical metal ones, do you get images like the “Earth trembling,”  “Mountains quaking,” “stars fighting from heaven,” and “The torrent Kishon swept them away.”

Is anyone else picturing Dream Theater or Ronnie James Dio singing this yet?

This isn’t outright stated, but I am pretty sure Deborah and Barak sang this as a duet. Kinda like Kenny Rogers and Dolly Parton. Er, um, or like Aaron Neville and Linda Ronstadt, NO!

This is at least up there with Jay-Z and Alicia Keys (I know it’s not a rock song but how can you not like Empire State of Mind?!) or maybe Tom Petty and Stevie Nicks. Yeah, let’s go with that one.

Ok, Deborah is a prophet, a political leader who builds up the middle class, a warrior (I use that phrase very intentionally, click the link!), a Judge, and she can freakin’ SHRED when she sings lead vocals?

Not bad Deborah. Not bad at all.